Soft Child—How Rattlesnake Got Its Fangs
​ 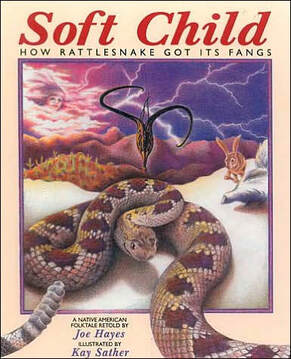 ​About the story: Soft Child, a poor gentle snake, is worried about getting stepped on as he moves on his belly across the desert. The other animals, especially Jackrabbit, are relentless in their pursuit of this defenseless creature, until Sky God comes up with a lasting solution to the problem—and Soft Child becomes known as "Rattlesnake."

About the author: Joe Hayes is one of America's premier storytellers—     a nationally recognized teller of tales from the Hispanic, Native American and Anglo cultures. His bilingual Spanish-English tellings have earned him a distinctive place among America's storytellers. His bilingual books are used in schools all over the United States. For twenty-six summers Joe has been the resident storyteller at the Wheelwright Museum of the American Indian in Santa Fe. He has shared stories in over 3,000 schools and spoken at educational conferences throughout the country. He has appeared at the National Storytelling Festival in Jonesborough, TN, and one of his tales was chosen for the book Best Loved Stories Told at The National Storytelling Festival. His first book, The Day It Snowed Tortillas, was published in 1982. It is a collection of some of Joe's favorite Hispanic stories from New Mexico, and has become a regional classic.

What do these words mean?

What are some other animals that are also nocturnal?

What are some other animals that are also diurnal?

You can answer these questions, see what other kids think,  show us your snake and coloring  pages, and talk to an instructor @CrucesCreatives   #CCMakerKits
All replies receive a FREE animal book and a finger puppet!

​Send your answers to   jigilbert@zianet.com  and also mention the story you liked best and tell why. We’d love to hear from you!
​​
(Jean Gilbert, author of this snake unit, is a retired elementary school teacher and a HSSNM board member.)