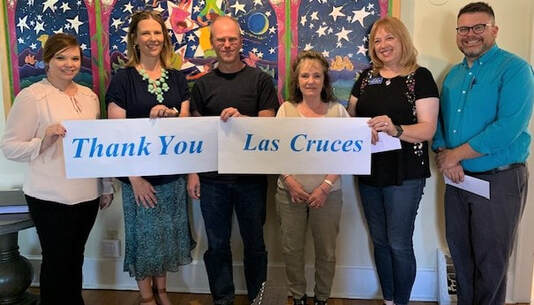 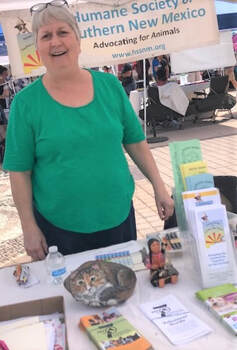 Casey Jobling, HSSNM board member, staffs the Humane Society's table during the 7th Annual City of Las Cruces Volunteer Fair held April 6th on the plaza near Farmers' Market. Over 50 non-profit organizations were represented at the fair with 1,500-1,600 people attending. 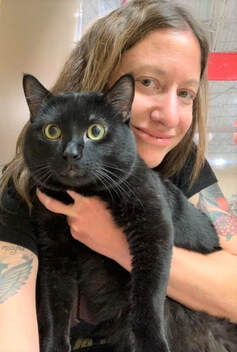 The Humane Society of Southern NM operated the cattery at the Las Cruces PetSmart Store as a partner with PetSmart Charities for over a decade!   More than 500 rescued felines from the community were adopted into loving homes during the 10 years of partnership. HSSNM applauds the dedicated team of volunteers under the direction of Rebecca Stanger who served as the organization's cat captain in recent years, for their tremendous work socializing and caring for the cats including maintenance of the cat condos. HSSNM will continue with the organization's programs including foster-adoption work, providing resources and addressing priority animal welfare issues.  HSSNM congratulates Broken Promises Southwest as their successor with best wishes in the operation of the cattery at PetSmart! 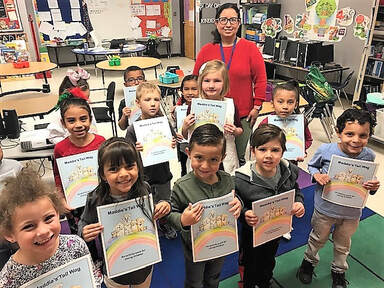 Ms. Bourdreau's kinder class at Highland Elementary receives "Maddie Tail Wag" color books in December as holiday gifts for participating in HSSNM "Fur'ever Friends" sessions.  Ms. Tapia, educational assistant, is pictured with the students.  "Maddie Tail Wag" books were a generous gift to HSSNM from Maddie's Fund, a family foundation awarding grants to non-profits with MF mission to create a No Kill nation. Over 200 animal-themed books were given to students in the Fur'ever Friends and Critter Connection programs as holiday gifts from HSSNM.
HSSNM Annual Members & Friends Meeting - October 6th, 2018

The Humane Society of Southern NM held its "Annual Members & Friends Meeting" on Saturday, October 6th at Desert Gardens clubhouse in Las Cruces. Attendees at the meeting were HSSNM board of directors, members and friends of the organization, animal advocates from the community, representatives of the Coalition for Pets & People, and candidates for offices of Sheriff and County Commission Districts 1 & District 3. Musician Mark Courtney opened the program with animal-themed songs including an entertaining one about a horse, reminiscent of a sheriff's posse. Candidates shared their positions on animal welfare topics and issues, ending with Q&A time. 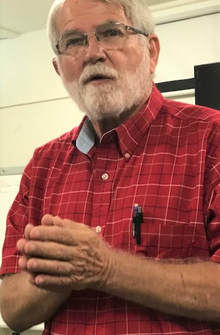 The "Animal Fostering Forum," held August 18th at the UUCLC library, was attended by approximately 40 people.  The audience included animal welfare advocates representing various community organizations/agencies and members of the public. The most exciting part of the forum were the number of main players and advocates gathered in one room, with inspired members of the public conversing on a topic fundamental to reaching and sustaining our No Kill Community Goal!!

​Frank Bryce, president of the Humane Society of Southern NM, discussed the need for fosters on a short-term basis, to help lost-stray animals with scanning for micro-chips and uniting with owners, as well as other urgent needs that come through HSSNM’s pet help line.  He also addressed the need for fosters in a variety of capacities including the Last Litter program and for pets in transition from a shelter or a rescue group going on transport.

See  more about this event   here. 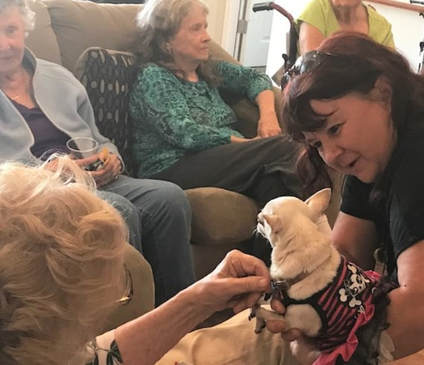 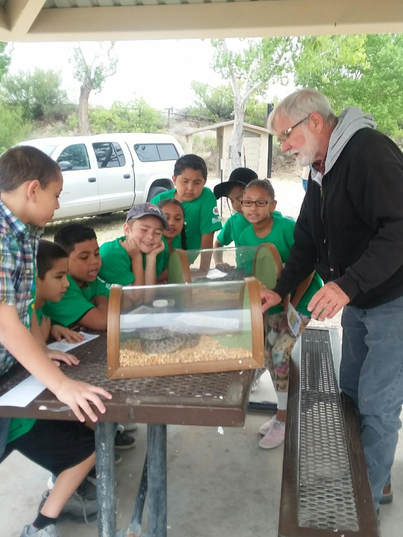 Frank Bryce, HSSNM President, provides an education program on safety around snakes and respect for desert wildlife to third graders from Hermosa Heights Elem. during a special school outing in April.  Groups of 8-12 students rotated at tables stationed at the park, with about 100 students participating in all.  The snake shown in the front cage is a Western Diamondback Rattlesnake. 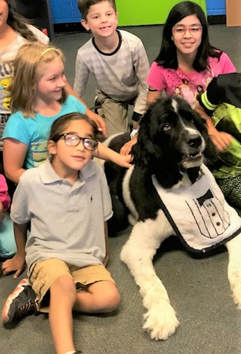 Boys & Girls Club children enjoy meeting  "Z", a Newfoundland, at a Critter Connection session. TheraPaws member Teressa Ray and the owner of "Z" gave a presentation on the needs of large breed dogs and the importance of socialization and training.
HSSNM & CfPP Info Booth at City of Las Cruces Volunteer Fair - April 7th, 2018
The Humane Society of Southern NM and the Coalition for Pets & People held an information booth at the City of Las Cruces Volunteer Fair on April 7th. The fair was held on the Downtown Plaza with over 50 local organizations participating. Attendees visiting the HSSNM & CfPP booth were eligible for give-aways through a drawing and provided information on a range of pet care/responsibility topics including spay-neuter, micro-chipping, low cost services, and volunteer opportunities with local animal welfare groups.  The latter included volunteer opportunities with Uncaged Paws, organizing an April  10th rescue & transport effort for over 40 shelter dogs to Boise, Idaho by plane with "Dog is My Co-Pilot".
Critter Connection Sessions  - September 19th & October 18th, 2017 @ Onate High School
​
Don Toomey, a TheraPaws trainer-member with his dog “Jackson”, a certified TheraPaws ambassador dog & Siberian Husky, provided an enriching session on pet care and owner responsibility for Onate High School sped class students.  The students learned Jackson’s history, adopted by Don from our local animal shelter as an  adult and how Jackson regained physical health and trust in people through Don’s family’s loving care after experiencing abuse as a puppy and young adult. Don demonstrated commands Jackson follows in English, Spanish, and German through his extensive training.

The Humane Society of Southern NM marked its 10-year anniversary providing programs-services for animals in Las Cruces, Dona Ana County, and the region.  HSSNM celebrated this important milestone at the organization’s “Annual Members & Friends Meeting” on August 19th.   The event was held in the Education Great Room Building of the Unitarian Church of LC and was well attended by citizens and representatives of animal welfare organizations.

HSSNM President Frank Bryce opened the meeting with an introduction and welcome. Talented musician and guitarist Mark Sukontarak started the program segment with inspiring animal themed songs like “Grey Dog”,  capturing the attention of the audience.  The new Las Cruces City Manager Stuart Ed and Supervisor of Animal Control Gino Jimenez were the featured speakers on the topic of “Trends and Future of Animal Control”.  The meeting concluded with a productive Q&A segment with participation by the audience. 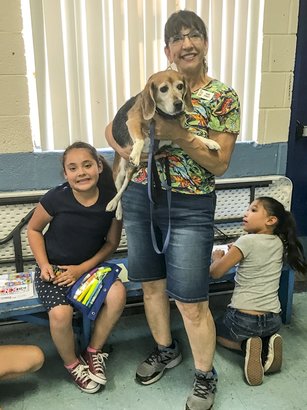 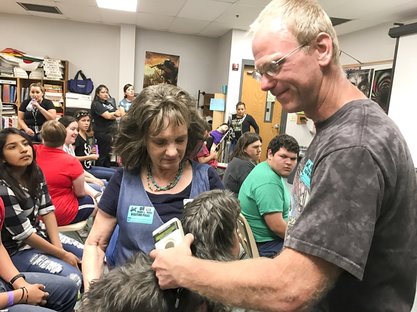 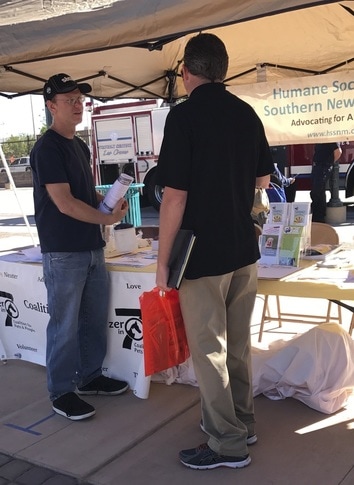 ​Las Cruces Community Volunteer Fair - April 8th, 2017
​
Animal advocate Rick Hahn talks to a citizen during the 5th annual “Las Cruces Community Volunteer Fair” held April 8th. HSSNM and Coalition for Pets & People members staffed a table for outreach and informed citizens about volunteer opportunities with area animal welfare organizations and agencies. The fair was well-attended with many people stopping by the table expressing interest and support.
Back to Upcoming and Recent Events